Navigating the Perfect Storm: Global Risks and Opportunities in Food, Energy, Environment and Water to 2050

Speech given by Professor R. Quentin Grafton at the occasion of the Policy Forum (www.policyforum.net) Lunch on 22 April, 2015, The Australian National University, Canberra.

Today, the 22nd of April 2015 is Earth Day. The picture you see was taken on Christmas Eve 1968 by William Anders on the Apollo 8 space mission some 47 years ago. Much has changed since that first manned journey around the moon. Not least, the world’s population was then 3.6 billion. It is now more than twice as large and is projected to be 9.6 billion by 2050.

1968 was arguably the year hope died for many who wanted a better world. It could be described as the year of the ‘perfect storm’. Robert (aka Bobby) Kennedy, Democratic Presidential candidate, and brother of President John F. Kennedy, and also the Reverend Martin Luther King Junior were both assassinated in that critical year.

These two assassinations, and the ending of the Prague Spring by Soviet tanks, the Paris student riots, a worsening conflict in Nigeria with The Biafran War, and a low-point in the Chinese Cultural Revolution all happened in 1968. Such events changed the Zeitgeist of the time. This, I contend, is why the picture of a small earth alone in space captured the imagination of all who saw it then, and all who see it today. It unites us all.

It is, therefore, fitting to recall Bobby Kennedy who said:

I am inspired by this message of hope. It is not a question of whether the glass is half empty, or half full, but what are we going to do about it? Instead of simply looking at the glass, we can play our part and actually fill it.

In his Nobel acceptance speech to the Swedish Academy the writer John Steinbeck, and the author of “The Grapes of Wrath”, stated:

“Man himself has become the greatest challenge and our only hope.”

We can no longer afford to be spectators to what is happening in the world today, we need to become actors that play an active role in what happens on the global stage.

Despite the chaos of 1968, in the years since the world successfully overcame a pending global food crisis despite the fact that the human population was then growing at close to its fastest rate ever. Yet given this formidable challenge, global food supplies tripled and world per capita incomes, in real terms, more than doubled. Few people back in 1968 would have believed that such successes were possible when the world then faced a cold war that was at its height, and when the risks of nuclear conflict seemed so near.

The very positive changes witnessed over the past 50 years or so did not just happen by accident. They were caused by the deliberate actions of individuals in both the private sector and the public sector. Investments were made in high-yielding crops varieties, knowledge was created and diffused, and gradually people were given opportunities in terms of better education, health care and employment.

It is worth considering these human triumphs when thinking about what we must do in the next 35 years as we face the human-created challenge of climate change, the need to produce at least 60% more food and how we can respond to projected increased water demand of at least 50%, and primary energy demand of 40% by 2050, but without damaging the soils and resources we need to feed the world.

I contend that our past successes made many of us complacent in the 1990s and the early 2000s. Seemingly, somehow, it was thought that business as usual would continue to deliver the food and the environmental services that we all need, now and forever.

The rude awakening came exactly 40 years later. In 2008-09, the world experienced its worst economic recession in 70 years with the Global Financial Crisis (aka the Great Recession). It showed that very large and unexpected shocks can happen almost ‘out of the blue’ and be enormously damaging. Equally as important, it showed that driving our planet on ‘cruise control’ is simply not good enough and that past ways of decision making and understanding of risks had spectacularly failed.

Immediately before the global economic crisis, the world had experienced a food crisis. Average food prices rose some 80%, on average, from 2005 to 2008 primarily as a result of high-energy prices, but also in part due to misguided policies to subsidize biofuels production. Indeed, in the absence of biofuels production, the global food price in 2008 would have been 23% lower than it was actually. The end result of both higher energy prices and biofuel subsidies was that globally an additional 100 million people became chronically undernourished.

These price increases, and another price spike in wheat in 2010-11, were contributing factors to the Arab Spring that got under way at the very end of 2010. Just as in the French Revolution 220 years previously, very high food prices generate their own political and socio-economic risks.

The food price spikes of 2008-2011 show the systemic risks between food and energy. Recent droughts, such as Australia’s own Millennium Drought that ended in 2010, or the California Drought which is four years in the making and is still on going in 2015, illustrate our critical dependence on water for food production and environmental services.

1968 was the year that the phrase the ‘Green Revolution’ was popularised in reference to the ability of higher-yielding varieties, coupled with greater inputs, to transform food production. One of the ‘Fathers’ of the Green Revolution, Norman Borlaug, who did pioneering work in plant breeding on high-yielding wheat varieties, was awarded the Nobel Prize for his contributions to world peace as a result of his efforts to increase global food supplies.

Unlike 1968, in 2015 we are approaching, or perhaps have surpassed, key planetary boundaries or limits. Simply put, it is not physically possible to increase food supplies at the expense of extracting water at an increasing rate or irreparable soil degradation in many of the key food growing regions of the world. Instead, we need an alternative vision that has been called ‘sustainable intensification’.

I interpret sustainable intensification as increasing food production, but without using more arable land or inputs, such as water, that would degrade our long-term ability to produce food or irreparably damage critical environmental systems.

Full consideration of the systemic risks across food, energy and water, and the collective impacts on the environment, are achievable. It is no pipe dream. But it will not happen by simply wishing it, by moral exhortations that we become vegans, or by resting on past laurels.
Too often we wring our hands, take amazing pictures to illustrate our despair, make documentaries, swarm together on social media and care loudly and publicly.

We have telegraphed the problem to the world.

NOW WE MUST FIX IT AND WE KNOW HOW

The global food, energy and water risks of today demand nothing less than a ‘paradigm shift’ in how we see the world, and how we make decisions. ‘Silo thinking’, which may have delivered in the past, is simply not good enough in a highly-connected world where a drought in China can trigger a revolution in Egypt. Or when the banning of rice exports in one country can temporarily push millions of people in other places to become malnourished.

There is a better way. It’s not ‘tears for fears’ nor is it more hand wringing or even food aid, however well meaning. What is required are ways to help decision makers make better decisions, whether it be a farmer, a catchment manager or a president.

My colleagues and I in the Food, Energy, Environment and Water (FE2W) Network have developed a Risk & Opportunities Assessment for Decision-making (ROAD) which can be applied at different scales and scope and is intended to improve decision making by accounting for systemic risks. It is not an optimization framework, but instead provides ways of assessing risks that explicitly incorporates the decisions needed to be made by individuals, businesses and governments.

1) Delineation of the decision space and questions;

2) Evaluation of threats and their triggers;

4) Analysis of decision options for controls and ways to mitigate consequences, including a summary and justification for the selected decisions; and

5) Update and review following the decisions and their implementation.

The time and effort to apply our framework will depend on the temporal and geographical scale of the decisions at hand. For a subsistence farmer it may be a simple and virtually costless process, but one that would provide a more systematic way to assess and mitigate risks. By contrast, for a state water department responding to food and water risks along the Ganges, it would be much more involved, considering multiple triggers and threats and risks and a range of decision controls and options.

Whatever the scale or challenge, the value add of the Risk and Opportunities Assessment for Decision-making (ROAD) is to provide a way for decision makers to make causal, risk-based decisions. This is urgently needed in the food, energy, environment and water space.

Please work with us and partner with us and also decision makers working at different scales in key parts of the world: The Volta Basin and also the Nile Basin in Africa; the Ganges-Brahmaputra-Meghna in South Asia; the Mekong in South-East Asia; the Colorado in the US and Mexico; and the Murray-Darling in Australia.

Our efforts to navigate the perfect storm needs the support of ambassadors, donors, thinkers and doers.

Collectively, we need, and we must, build durable partnerships and the means to scale up the ROAD framework to generate improved outcomes on the ground, and around the world.

This is a collective effort. It requires that we manage and mitigate the systemic risks across food, energy, the environment and water so that we can promote a sustainable and prosperous future for all of humanity.

There is no question that the world faces major challenges over the coming decades in the context of food, energy, the environment and water. But just as in 1968, when it all seemed ‘too hard’ and when many believed that the world was heading towards mass starvation, we collectively turned the ship around in very stormy waters.

The time for Brothers Grimm fables are over. The time for actions is at hand. Many opportunities exist, and better decision making can deliver solutions to the challenges that we face. We know what to do and where to start to work.

Humanity proved the ‘food doom mongers’ wrong in 1968. This was done by using more land, a lot more inputs, especially fertilizers and water, by improving technologies, and with a single-minded focus on production. In the next 35 years we must act differently. Increasing food supplies at the expense of irreversible soil loss or the mining of key aquifers, or much greater greenhouse gas emissions, is no longer sustainable, if it ever was.

Now an alternative path is required. This pathway to the future demands better decision making that ‘connects the dots’ across food, energy, environment and water. It requires decisions that fully account for the value chains from the ‘farm gate to the dinner plate’. It needs integrated assessment and management to promote resilient food-energy-water systems that can withstand unexpected and negative shocks, and decisions that do not compromise future sustainability.

Better risk-based decisions are needed if we are to ‘navigate the perfect storm’ that lies ahead of us to 2050 and beyond. This is not a journey we can take by ourselves, we must work together.

We can continue to feed and clothe the world, but not in ways that compromise our common future. Instead, we must act to ensure our food and natural systems are resilient to shocks and that we are responsive to the opportunities of the unexpected. 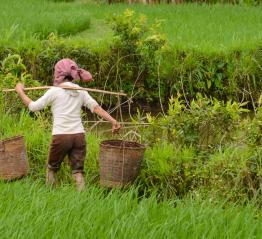 Feeding More than 9 Billion by 2050: Challenges and Opportunities

On 22 April 2015, the Crawford School of Public Policy, FE2W Network and the OECD Co-operative Research Programme on Biological Resource